Reflections of a Summer Camp Instructor 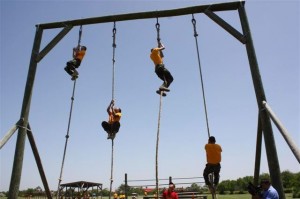 This coming summer camp will mark my 16th year at Marine Military Academy.  Over the years I have observed thousands of campers and have some very vivid memories of many of them although I cannot remember most of the names.  Summer camp is probably the most intense time of the year at the Academy and the days go by so fast that it is hard to imagine that it lasts four weeks.  My normal work place during summer camp is on our rappel tower or the high ropes course.  I am normally involved in many of the other activities but these two take up most of my time and it on these that I have the most vivid memories of the last 16 summers! 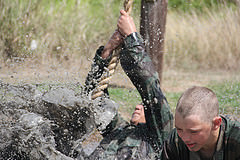 I first arrived at Marine Military Academy in the summer of 1997 and was not involved in the activities that year.  The following summer was my first being involved in the activities and summer camp was a much different experience at that time.  The Leadership Enhancement and Development Complex did not exist at this time and most of the activities centered around the main academy.  An older Confidence Course which was much smaller than our current one and our Mud Course were the primary challenging activities at that time.  Summer camp included much more drill and many sporting activities such as volleyball, basketball, dodge ball.  We also had boxing, swimming and marksmanship.  It was not until 1999 that work began on the LEAD Complex and summer camp became a whole new game.  Summer camp began to take on the look of an adventure type camp where campers were challenged on physical activities.  Rappelling and the Obstacle Course were two of the earliest events along with our Leadership Reaction Course.  It was at this time that the first core of RappelMasters were certified at the Academy and I joined their ranks as one of the first five intstructors.

The most vivid and rewarding memories I have of summer camp is the changes I observe in those young men that show up on registration day and walk across the parade deck four weeks later.  When I first come in close contact with them on the tower many of them are timid, scared and unsure of their capabilities.  Four weeks later I see confident young men that know they have taken on a challenging task and completed it.  It is not an easy summer for them and many nights they fall into bed exhausted from the days events however, the next morning they are up before the sun ready to do it all again.  The look on a young man’s face when he stands on the edge of the tower with nothing but a 11 millimeter rope attached to him and watch the look change as he rappels down the tower is a reward that cannot be described adequately.  To see that look of fear change into a grin from ear to ear once he has accomplished it makes all the hard work, hot days in the sun and long hours worthwhile.  I can’t say that every camper that attends the four weeks will admit they had fun.  For some the separation from home, the new environment, the weather all combine to make it less than a memorable experience but summer camp is what the camper makes of it.  Those that strive to get as much into every day as possible, that run back up the tower for more rappelling or riding the zipline, that ask to run the obstacle course a second time all find that it was more than worthwhile, it was life changing. 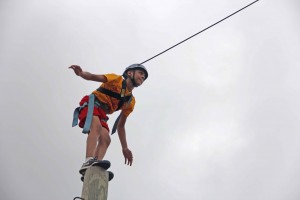 To say that the memories a camper gains will last a lifetime is not an idle boast.  I have had cadets return to the Academy many years after attending their first summer camp and describe to me the exact feelings they had the first time they stood before me at a rappel station.  They can still vividly recall how they felt and how much they wanted to succeed in rappelling and they can also remember how they felt once they realized they could do it!  Memories such as those cannot be bought or gained through watching some adventure show on television.  They can only come about by doing it yourself!  Those are the memories that last.

Check out What Some of Campers

Check out all the details by visiting our Website or watch our Summer Camp 2012 Video.

Letter of Appreciation from Kelly Teran