ESL students proved to be rocket scientists early this morning as they detonated their hand-crafted rockets.  Using English-only instructions and the  English-only direction of “Professor” David Allen, each 2-man group assembled a model rocket, then designed and painted the exteriors. 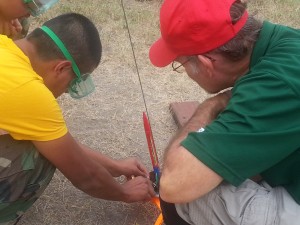 As Professors David Allen, Diolanda Dye, Pat Flores, Christina Donovan, and SgtMaj Wilson stood by, each group detonated their rocket and, as classmates counted down FIVE, FOUR, THREE, TWO, ONE the rockets were launched far, far, above into the bright blue Texas sky.  Parachutes opened and brisk winds carried the rockets to near and far as each group scurried to retrieve what was left of the blazing wonders.

100% success, and smiles all around…HOO RAH!