ENGLISH AS A SECOND LANGUAGE (ESL)

The English As a Second Language (ESL) camp at Marine Military Academy is a four-week language immersion program for boys who wish to learn English. The ESL camp is held the same time as MMA Summer Camp.

Our ESL Camp will not be offered during the Summer of 2022. But, you can still have fun and hone your English skills. Joins us for MMA's all-boys summer camp.

ESL campers spend 30 hours a week in the classroom learning English. All ESL campers complete a minimum of three classroom projects that require them to follow English-only instructions. When they are not in class, ESL campers practice their new English skills during their afternoon and weekend activities. ESL campers not only learn English quickly, they make friends from all over the world. Register for ESL at MMA today! 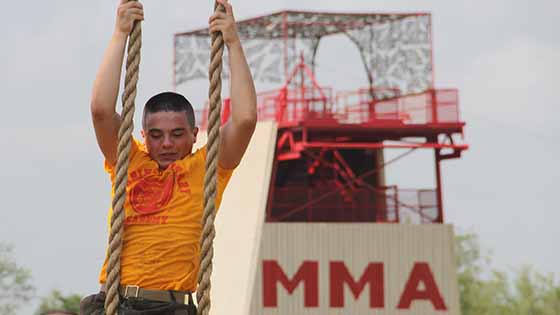 At MMA, ESL campers learn much more than English. The military activities are designed to teach the campers teamwork and problem solving as well as build self-esteem and confidence. The military environment also teaches them discipline, manners and respect for others. Since ESL campers come from all over the world, they also learn about other culture and languages.

We strongly encourage you to submit your son's application and supporting documents for English as a Second Language summer camp at the earliest convenience to avoid being placed on a waiting list.

The due date for your summer camp fee will be specified on your son’s acceptance cover letter notification. However, please note that all camp fees must be paid in full before the camp check in date.

Once an applicant is accepted to participate in the English as a Second Language summer camp program, an acceptance packet will be sent. This packet provides an official notification regarding his acceptance and includes additional information, such as a "Who to Call" sheet and a "What to Bring" list.

Space is limited...
Your son is not.